Germs are the main source of concern followed by formaldehyde and PM2.5. The worry of bacteria and viruses in the indoor air is understandable considering that over 50% of parents also report that their children get sick frequently, up to once a month.

Very few parents, however, associate indoor air pollution with the allergies almost half of Chinese children, and over 60% of adults, report that they suffer from. Only 6% worry about the presence in their homes of the most common airborne triggers for allergies such as pollen, dust and dust mites.

Awareness is also very low on how to ensure a healthy indoor air climate free from household pollutants such as germs, smoke, smells, dust, allergens and toxic gases like formaldehyde. One of the most interesting findings, is the clear disconnect in Chinese parents’ approach to outdoor air. While parents say that the family refrains from participating in outdoor activities to protect their children from air pollution, the most common way to deal with indoor air pollution, is by opening a window to let polluted outdoor air into the home. Other popular methods of improving indoor air quality is by shaddock peel and onions.

"An air purifiers is one of the most scientific methods to improve indoor air quality” said Yang Guandong, a senior engineer at the Chinese Academy of Science Testing and a member of the air purification committee of the Chinese Quality Inspection Association. "According to our tests, the Blueair i-Classic range and the Blueair Pro M and Pro L air purifiers, effectively remove the most common bacteria and viruses* with a clearance rate of 99.99% in 60 minutes" added Guandong.

“The research clearly shows that there is a worry among Chinese parents, but more importantly that Chinese children suffer from allergies, frequent colds, and other illnesses” said Henk in ’t Hof, CEO Blueair. “Clean air improves the health, the immune system and learning abilities of children, it also reduces the risk of allergies and respiratory illnesses. At Blueair we are committed to improve the health and well-being of children everywhere. We are therefore happy to partner with TMALL for this important piece of research” said in ’t Hof.

Blueair and TMALL Innovation center carried out a quantitative survey of 1719 men and women between 25-44 years old during August 2018. All participants in the survey are married and live in tier one and tier two cities in mainland China. Two thirds of respondents are parents and about half have children under the age of six years old. The largest representation of participants come from Eastern China (31.60%) followed by the Southern region (15.80%), Midland (21.10%), Northern (10.50%), Northwest (10.50%) and Southwest (10.50%). The research was carried out between 13-20 August 2018 through internet panels.

Through the TMALL Innovation Center (TMIC), Alibaba shares Chinese consumer data with the objective of helping international brands bring better products to the Chinese market, at a faster pace. So far over 81 companies, including Procter & Gamble, Unilever, Estée Lauder, Shiseido, Mars, Mattel, Johnson & Johnson, L’Oréal and Samsung, have partnered with TMIC on innovation projects specifically designed for the Chinese market. Tmall Innovation Centre was launched in 2017 and is based at Alibaba headquarters in Hangzhou. 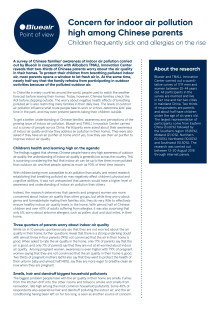 A survey of Chinese families’ awareness of indoor air pollution carried out by Blueair in cooperation with Alibaba’s TMALL reveals that two-thirds of Chinese parents worry about the air quality in their homes.