Berlin, September 2, 2016 – Blueair consolidates its leadership position in the indoor air cleaning market globally with a cavalcade of air purifying products being showcased this week at Berlin’s IFA tech show, the largest innovation show on the planet. Taking pride-of-place among over 1,823 consumer electronic exhibitors, Blueair is showcasing its full lineup of health and wellbeing air purifier technologies and products.

In addition, Blueair will also premiere its New Classic range, which offers both enhanced design and features embracing a new user interface and improved filtration efficiency. In addition, Blueair unveils the exciting, design award winning Blue by Blueair air purifier range geared to appeal to a new generation of active, health and sports focused consumers and that is now becoming available throughout Europe.

“We are proud at Blueair to be able to use IFA Berlin 2016 to demonstrate our expertise and award-winning products that blend naturally into living spaces and redefine how we can breathe clean air regardless of the pollution outside,” Herman said. 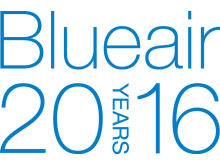