Blueair, a world leader in purifying indoor air to improve people’s lives by removing health threatening airborne contaminants, has applauded the World Bank for its new study highlighting the emergence of air pollution as the deadliest form of pollution. Blueair has repeatedly called for urgent action to address the problem of airborne pollution, indoors and outdoors.

New scientific research underlines the cradle-to-grave threats to posed to human health and wellness by air pollution, both inside our homes and workspaces and outside on the street. But Blueair founder Bengt Rittri says individuals can take proactive, individual steps to head off airborne pollutants to create safer indoor environments. 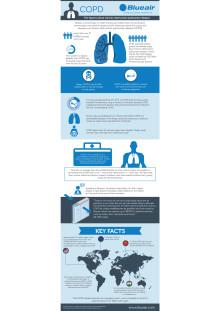 COPD kills three million people a year globally and is set to become the third biggest killer of humans within 15 years, according to WHO. COPD is caused by smoking and airborne pollutants such as dust and chemicals, which can be removed indoors at home and work by Blueair's award winning mobile air purifiers.