Stockholm, Sweden, December 16, 2016 – The Blueair Sense+ air purifier has been rated one of India’s top home tech gadgets of 2016 by the Indian edition of Stuff Magazine, the world's biggest gadget and technology lifestyle magazine with more than 25 editions globally.

In its ‘Home Gadget of the Year 2016’ review, Stuff magazine said the gesture and app controls of the Sense+ elevate the air purifier to ‘geek-lust status’. The reviewers at India's edition of the consumer electronics magazine, which previews future technology to create a must-have gadget shortlist, also noted how the Blueair Aware air monitor ‘quietly keeps a check on the air you breathe’.

Sense+ takes indoor air cleaning into the ‘Internet of Things’ by reimagining Blueair’s renowned indoor air purifying expertise with a host of smart features and benefits packaged in an exceptionally contemporary design. With its eye-catching, beautiful and refined design and top air purifying performance, Sense+ delivers owners the ability to control the purity of their indoor air from their cell phones or other mobile devices.

Available in six colours in markets around the world, the sleek-looking air purifier teams with the Blueair Aware air monitor to enable people to monitor their indoor air in real-time, track data over time, and get alerts from their Smartphone or tablet with the Blueair Friend app. The semi-conical, six-inch high air monitor detects a huge range of airborne contaminants, such as formaldehyde or benzene, and reveals indoor air quality in six levels visualized by the color on an LED bar, with deep blue indicating excellent air quality and dark orange revealing highly polluted air.

The second-generation Sense+ has a clean air delivery rate of over 130 feet per minute and the capacity to purify a 200 square foot space (20 square meters) every 12 minutes of dust, allergens, chemicals, viruses and odors. The user interface, controlled by gentle hand swipes above the Sense+ hardened-glass surface top, embraces a WiFi strength-indicator, a WiFi button and a filter change indicator.

Other Sense+ features include improved performance on the highest speed setting, an ultra-low sound level on the lowest setting and a WiFi enabled remote control for use with the Blueair Friend app. The remote control will turn the Sense+ on or off, adjust fan speed, set a timer, dim or sharpen LED intensity, put the appliance into ‘sleep mode’, enable a child lock and indicate when a filter needs changing. 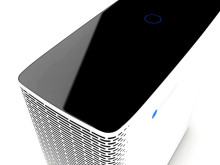 The hi-tech Blueair Sense indoor air cleaner was designed and innovated with love in Sweden by the Swedish world-famous Claesson Koivisto...