“Best in test is the Blueair Classic 405, which by far has the greatest cleaning capacity on low noise levels (under 37dB) and the best result on max power for pollen", said Carl-Magnus Brandberg, Managing Director of Testfakta Research. "Even at lowest speed, Blueair manages to clean the air from dust and pollen in a space of 41 square meters, compared with 5-24 square meters for the other air purifiers tested".

“We have over 20 years of experience of developing best-in-class air purifiers to improve the health and wellbeing of families around the world” said Daniel Johansson, head of R&D at Blueair. “Thanks to our unique HepaSilent™ technology which combines mechanical and electrostatic filtration, our air purifiers are recognized for superior performance while being whisper-silent and energy-efficient”.

The following air purifiers were tested:

Blueair Classic 405 is designed for medium-sized rooms (40m²) and is the wise choice for people with allergies, asthma and other respiratory problems. It is Wi-Fi compatible and works with Blueair Friend app and has a user-friendly touch display with clear LED icons. Blueair Classic 405 is rated “Best-Buy” by UK consumer organisation Which?, recommended by Asthma Allergy Nordic for people with asthma, allergies and other respiratory illnesses, and by Today’s Parents, as the air purifier of choice for children and families.

Why use an air purifier?

In addition to pollen, smoke and car exhausts entering our homes, dust, bacteria, virus and chemicals released from paint, furniture and clothing, make indoor air up to five times more polluted than outdoor air. Clean air improves health, sleep and well-being. It is also known to improve learning. Children are particularly vulnerable to breathing polluted air as their lungs and brains are still developing.

Testfakta Research conducted comparative laboratory tests of air purifiers with the purpose of comparing the performance of air purifiers sold on the British and Nordic markets. The laboratory tests were performed by Intertek Testing & Certification and IBR Laboratories in the UK. The sample was selected by Testfakta Research on the basis of models suitable for a medium-sized room. The capacity was tested according to test standard ANSI/AHAM AC1-2015, measuring the capacity to eliminate various types of particles (dust and pollen). The 15 different models were tested on capacity at 37dB and at max speed. They were also tested for ease of use and ozone emissions. Read more about the tests here. 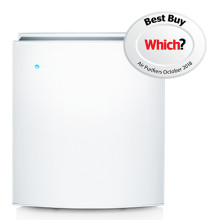 Swedish Blueair, designing air purifiers to create the safest environment for children to develop and grow, has joined forces with the Child Health Academy to educate British paediatricians, GPs, nurses and midwives on the impact of indoor air pollution on the health and development of children. This CPD educational programme, the first of its kind, is also designed to help HCPs advice parents.