Stockholm, February 14, 2016 – New research showing 5.5 million premature deaths are caused every year by polluted air has been described as a shocking wake-up call by the founder and CEO of the global Swedish clean air technology leader Blueair, Mr. Bengt Rittri. He said the study by the WHO Global Burden of Disease Project underlined the need both for aggressive government policies to reduce emissions and greater awareness among consumers about how they can take action to protect themselves.

“Society as a whole needs to declare war on the air pollution responsible for killing over 15,000 children, women and men every day according to this latest research,” Mr. Rittri said. He added that more people are dying around the world from breathing polluted air than other risk factors like malaria, malnutrition and obesity.

The research was presented at the 2016 annual meeting of the American Association for the Advancement of Science (AAAS), running February 14 - 15 in Washington, DC, USA. Listing air pollution as the further highest risk factor for death globally and by far the leading environmental risk factor for disease, the study said that more than half of 5.5 million deaths occur in two of the world’s fastest growing economies, China and India.

The research is an extension of the Global Burden of Disease study, an international collaboration led by the Institute for Health Metrics and Evaluation (IHME) at the University of Washington that systematically measured health and its risk factors, including air pollution levels, for 188 countries between 1990 and 2013. The study says cardiovascular disease accounts for most of the deaths from air pollution, along with lung cancer, chronic obstructive pulmonary disease (COPD) and respiratory infections.

“Air pollution is a global problem. With the U.S. Environmental Protection Agency, EPA, saying indoor air can be 100 times more polluted than outside, consumers need to be aware they can help protect themselves by using high-performance indoor air purifiers to clean their air just as they use vacuum cleaners to sweep the floor free of dirt,” said Mr. Rittri.

Sold in over 60 countries around the world, Blueair delivers home and office users more clean indoor air for enhanced user health and wellbeing faster than any competing air purifier thanks to its commitment to quality, energy efficiency and environmental care. A Blueair air purifier works efficiently, silently to remove 99.97% of allergens, asthma triggers, viruses, bacteria and other airborne pollutants. www.blueair.com 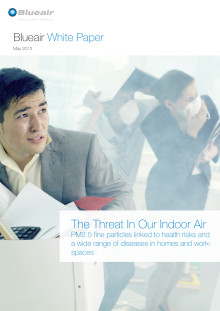