Envisioneering judges announced the Blueair awards during the Showstoppers product showcase event on January 6 for around 2,000 journalists at the International Consumer Electronics Show taking place in Las Vegas, Nevada.

“We staged our consumer launch of the Blueair Sense+, Aware air monitor and Friend app at Showstoppers @ CES as it is the ideal environment to showcase our innovation in delivering health and wellness enhancing technologies,” said Mr. Herman Pihlträd, President of Blueair Inc. He said the three new products are now shipping out and will be available physically in U.S. stores such as Bloomingdales, Brookstone and Gracious Homes, as well as through Allergy Buyers Club and online.

The Sense+ and Blueair Aware connect to the Blueair Friend app to provide a detailed view of indoor pollution. The Friend app also gathers data on an hourly basis from thousands of gauging stations in over 100 countries to deliver trustworthy information on local outdoor air quality.

Blueair’s visionary new technology is the world’s first smart, fully connected, fully working indoor air monitoring, control and purification system that puts consumers in control of the air they breathe, at home, work and play, removing up to 99.97% of contaminants.The connected Sense+, Aware and Friend means homeowners and businesses can enjoy indoor air free of allergens, chemicals, odors and dust particles, without the need to worry about it.

“Being honored with the Envisioneering awards indicates how Blueair is at the forefront of emerging, bold technologies and bringing them to market to enhance people’s health and wellbeing,” said Herman Pihlträd.

-Air pollution is behind over 200,000 early deaths every year in the USA alone, according to a 2013 study by researchers from Massachusetts Institute of Technology. Contamination of indoor air has been linked by other studies to rising rates of asthma, COPD, Alzheimer’s, and other diseases.

-Envisioneering is world-renowned for its objective assessment of new technologies, products and services, along with the talents who propel them to market. Envisioneering’s analysts are frequently quoted by print, web and video media for their assessments of “what’s next” in technology benefit, fun and value.

Sold in over 60 countries around the world, Blueair delivers home and office users more clean indoor air for enhanced user health and wellbeing faster than any competing air purifier thanks to its commitment to quality, energy efficiency and environmental care. A Blueair air purifier works efficiently, silently to remove 99.97% of allergens, asthma triggers, viruses, bacteria and other airborne pollutants. 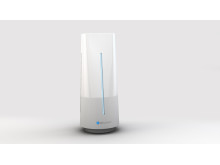 The Blueair Aware air monitors provides users a detailed view of contaminants such as VOC's polluting their indoor air at home, work or p...