London 17 September 2018: Over 50 schools in London have been identified as suffering from harmful levels of air pollution in a recent School Air Quality Audit Report by the Mayor of London’s office. As a result of the audit, several recommendations for the schools were set out which included installing air purifiers, green planting and walking to school. Christopher Hatton Primary School in the borough of Camden however decided to go one step further and contacted Blueair to donate an air purifier for each of their classrooms which has already led to a reduction in the pollution levels by up to 96%.

Christopher Hatton Primary School is located in one of the most congested areas of central London wedged between two main roads with major bus routes causing a peak in pollution. It also has poor ventilation resulting in the school’s air pollution levels reaching far above the legal limits. The audit sets out several recommendations of which Sadiq Khan, Mayor of London comments in his foreword: “We are confident that implementing the recommendations from these audits will go a long way to delivering cleaner air, reducing health inequalities and, most importantly, improving the health and wellbeing of our children.”

“Indoor air quality has a direct impact on children’s performance at school” said Sara Alsén, Chief Purpose Officer at Blueair. “Children are particularly vulnerable to air pollution as their lungs and brains are still developing. Breathing clean air on the other hand, can improve learning, physical performance and reduce the risk of asthma and allergies. Blueair has a strong social mission to improve the health and well-being of children everywhere and we are proud to support Christopher Hatton Primary School through our Clean Air for Children programme.”

The impact of the installation of the air purifiers has also been felt by the school’s head teacher.

Gwen Lee, Principal at Christopher Hatton Primary School says: “Some of the parents had air purifiers in their homes and felt they were effective so we wanted to find out what impact they might have in our classrooms. We had trialled a few air purifiers beforehand but one of the best things about the units that Blueair provided are that they are silent and unobtrusive which is important as anything that is noisy or causes a disruption to teachers, won’t be turned on.”

“We are aware of the issue of indoor air pollution so it is something we have been looking into for a while. As a state school, with a limited financial resources, installing high-performing air purifiers in all class rooms would not have been possible had it not been for the donation from Swedish company, Blueair.” We feel incredibly fortunate that Blueair offered to donate air purifiers for each of the classrooms.”

Gwen Lee continues “Children should have the right to breathe clean air. We know that pollution has a bigger impact on children than it does adults. We teach the children about environmental issues, including air pollution; it is a subject they are very engaged by and like us they are keen to find solutions to an issue which directly affects them.

The issue of indoor air pollution was something that the school and parents had been looking into for a while and we’ve even held fundraiser events such as bake sales to raise the extra funds needed for preventative measures.

Sarah De St Croix (parent at Christopher Hatton primary school) says: “Money from bake sales should be spent on enhancing curriculum activities such as art workshops and computers, it is frustrating that we were trying to raise money for tools just to keep our children healthy. Although I can’t see it, I’m conscious that when we’re on major through fares with trucks, taxis and buses, the children are breathing in this pollution, so it does worry me a lot.”

Sarah continues: “I look at my children and it’s very noticeable that they are very congested and have persistent coughs and colds. We walk to school which is surrounded by construction sites and vehicle traffic due to its central location within the capital city. We want to know that our children are healthy and we don’t want to feel that the school is a dangerous place to send our kids. Over the last few years, we’ve had to face that there is this increasing issue of air pollution that needs to be addressed. Despite efforts, the school obviously doesn’t have the funds to tackle it on its own so we’ve had to join forces. The air pollution is in our homes, on route to school and in our children’s classrooms so we feel very anxious about this danger. The reality is day to day life is dirty and the kids breathe it in every day. I would never give my children polluted water to drink – why should I let them breathe polluted air? or stand for someone blowing smoke in their faces, but yet it’s not that different. It’s just that we can’t see it!” 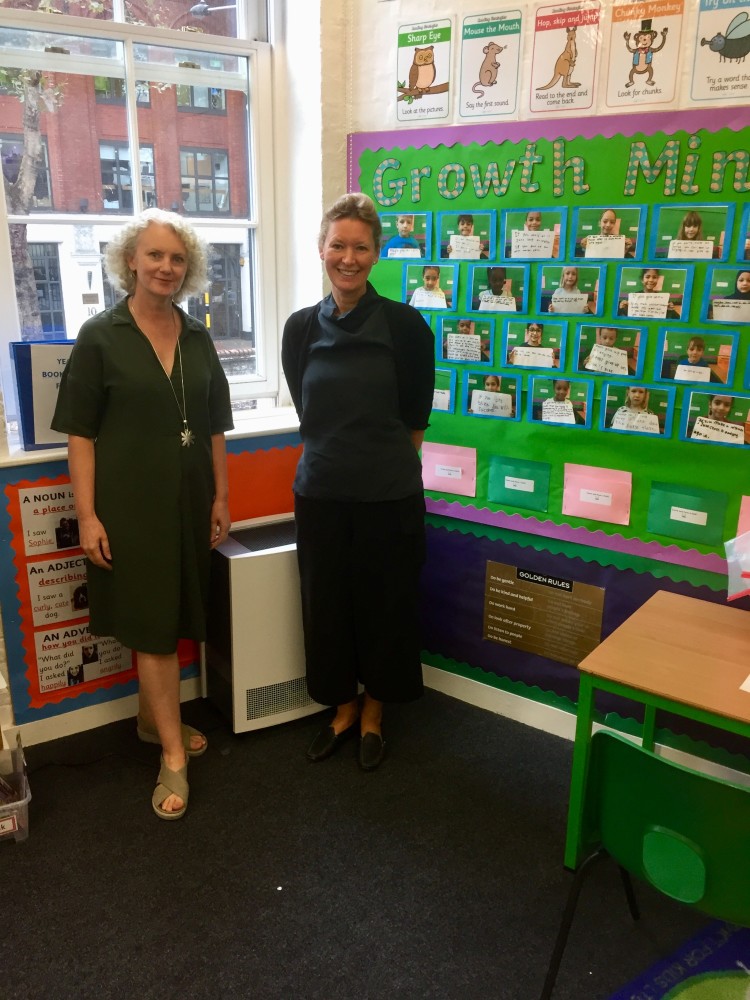