19 September 2019: Last year over 50 schools in London were identified as suffering from harmful levels of air pollution in a School Air Quality Audit Report by the Mayor of London’s office. As a result of the audit, several recommendations for the schools were set out which included installing air purifiers, green planting and walking to school. Christopher Hatton Primary School, Gospel Oak Primary & Nursery School and Netley Primary School and Centre for Autism, located in the borough of Camden, installed air purifiers from Swedish company Blueair. A year later, teachers from all three schools say that the air purifiers are beneficial to the children’s learning, focus and results. More than half of the 56 teachers surveyed also say that they have noticed a decrease in sick absenteeism among themselves and the children.

Mayor of London, Sadiq Khan, comments in his foreword to the School Air Quality Audit Report: “We are confident that implementing the recommendations from these audits will go a long way to delivering cleaner air, reducing health inequalities and, most importantly, improving the health and wellbeing of our children.” A survey of teachers and staff at Christopher Hatton, Gospel Oak and Netley primary schools, one year after the installation of Blueair air purifiers, show that improving classroom air quality can have a major effect on the health and learning of children.

Key findings from the survey of teachers:

“Our test-winning air purifiers are designed to create the safest environment for children to develop and grow. I’m therefore happy that teachers from three London schools independently testify to their effect in improving the health and learning of children” said Sara Alsén, Chief Purpose Officer at Swedish Blueair, a manufacturer of air purifiers for home and professional use.

The impact of the Blueair air purifiers has also been felt by the schools’ head teachers.

Gwen Lee, Principal at Christopher Hatton Primary School says: “We had trialled a few air purifier brands before installing Blueair last year. One of the best things about the Blueair air purifiers is that they are silent and unobtrusive which is important as anything that is noisy or causes a disruption to teachers won’t be turned on.”

Alan Murphy, Air Quality Leader at Netley commented: “Teachers are clearly appreciating the importance of clean air and the role the Blueair units play in helping to achieve it. Polluted air is shown to adversely impact on health and wellbeing, especially for children. It is a major focus for Netley due to HS2 construction and the congested roads around our school. Monitoring done last year showed very high levels of air pollution inside many classrooms at Netley. The Blueair air purifiers installed have dramatically improved the air quality internally.”

Before installing air purifiers at the three schools in September and October 2018, the mass concentration of particles per cubic meter (µg/m³) was measured in all classrooms. The particle concentration was then measured again after 60 minutes. The results from the first reading showed that all classrooms in all three schools had higher levels of particle concentration than the WHO recommended levels, some up to 40 times higher. The results from the second reading showed that the Blueair Classic 603 reduced the mass concentration of particles (PM 2.5 and PM 10) by between 92% and 97% (depending upon classroom measured).

In total, 56 teachers and staff from Christopher Hatton Primary School, Gospel Oak Primary & Nursery School and Netley Primary School and Centre for Autism, participated in the web-based survey carried out between 28 June and 17 July 2019. The survey was anonymous, and teachers participated with the understanding that answers are confidential and non-attributable and would only be presented in aggregated format. A full report of the findings is available here.

Blueair’s test-winning air purifiers remove dust, smoke, soot, car exhausts including nitrogen dioxide, pollen, bacteria and virus. Designed in Sweden to create the safest environment for children to develop and grow, Blueair air purifiers are recognized for superior performance in combination with low noise and low energy-consumption. They are used by schools, nurseries and children’s hospitals across the world.

A 6-month study across nursery schools in London, commissioned by the London Mayor, released today show that Blueair air purifiers have demonstrated a “positive impact on the nursery indoor air quality reducing PM2.5 and in some cases NO2”. London Mayor also called on the British government to urgently bring in industry performance and design standards for air filtration systems. 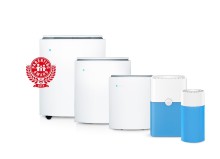 Blueair air purifiers are yet again recognized for its positive impact on the health and well-being of children, winning the 2019 “Parenting Award” in Japan. The award, which celebrates “the best products of the year”, comes in recognition of Blueair air purifiers “contributing to the creation of a child-friendly air quality environment". 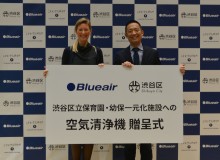 A survey of teachers and staff at three London primary schools, after the installation of air purifiers, shows that improving classroom air quality has a major effect on the health, learning and focus of children. 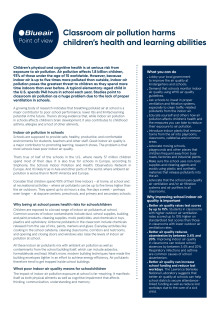 Children’s physical and cognitive health is at serious risk from exposure to indoor air pollution. A typical elementary-aged child in the US spends 940 hours a year in class rooms that can have pollution levels well above WHO limits. Blueair calls on school authorities and stakeholders to make creating the best learning environment a top priority.