Stockholm, 17 April: About 40% of the world’s population or 3 billion people suffer from hay fever, or allergic rhinitis, which is a risk factor for asthma and other chronic upper-airway diseases. The problem is, however, often neglected partly because it is hard to estimate the direct costs of the disease and partly because people generally consider pollen allergies a nuisance rather than a chronic disease.

Monitoring the pollen levels outdoors during allergy season has become commonplace in many countries. In 2017, the UK introduced “hay fever maps” to help hay fever sufferers avoid routes with plants that produce pollen that trigger allergy and asthma. However, indoor pollen monitoring is rare – although it is commonly known that indoor air is up to five times more polluted than outdoor air.

“Pollen enters our homes and offices through ventilation systems, windows and on shoes and clothing, hair and skin, said Annika Waller, CMO Blueair.“To improve the health and well-being of people, Blueair calls for monitoring of indoor air quality, especially in workplaces and schools.”

“We believe, governments have an obligation to decrease the national burden of pollen allergies by empowering people to take control of their indoor air quality, and provide better treatment and/or relief for allergy sufferers,” continued Waller. “Particularly children are at risk and must be protected from the risk of developing asthma and other other chronic upper-airway diseases”.

Pollen allergies on the rise worldwide

Seasonal allergic rhinitis varies around the globe, but generally lasts between two and four months. Increasingly, more people are being affectedwith studies indicating that the total number will double by 2050.There are various theories for the rise in the number of people affected, including dietary changes, improvements in personal hygiene as well as a decline in physical activity. Building heating and ventilation systems are also believed to be contributing factors. What we know, however, is that climate change, which makes the pollen season both longer and more intense in many parts of the world, and air pollution, which exacerbates the effects of allergic rhinitis, increases the burden on society.

The high cost of hay fever 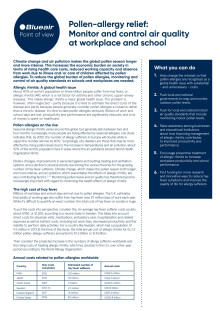 Climate change and air pollution makes the pollen season longer and more intense resulting in rising health care costs, reduced working capacity and absence from work due to illness and/or care of children affected by pollen allergies. To reduce the global burden of pollen allergies, monitoring and control of air quality standards at schools and workplaces are needed.